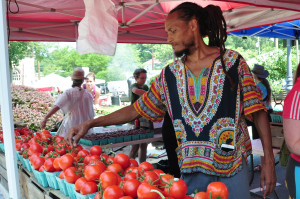 As a devoted Raw Foodist, Khepra Anu has dedicated his life to sharing his knowledge of the power that the Live Food lifestyle combined with systematic fasting has on the body. Over the past 15 years he has hosted numerous health retreats in the U.S. and internationally, during which he guides participants through his unique approach to repairing and detoxifying the human body through the scientific and mechanical application of coconut water, fresh juices, and living food. In 2011 Khepra expanded his platform by opening Khepra’s Raw Food Juice Bar in Washington, D.C., which was featured in the Washington Post’s Best Eats in 2012. In 2013 Khepra was a featured speaker at the Green Earth Festival in the Bahamas and a panel guest speaker at the Natural Living Seminar at Howard University. In the same year Khepra’s designer Raw Burger not only won him the Best Raw Cuisine award in the Best Food on the Planet competition in Ocean City, MD, but it was also featured on WETA’s Best Burgers in Washington television program.

His Raw Food creations have continued to earn him accolades with his most recent honor being from the ECAC 2014 Raw Food Festival, whose attendees voted his cuisine number one in four different categories: Best Dish, Best Savory dish, Best Dessert, and Best Juice. Khepra can often be heard on Washington D.C.’s public radio station WPFW where he is often invited to speak about the wonders of Raw Food living. In 2012 Khepra added author to his list of accomplishments by releasing his first book: Paradise Health: A Feasting and Fasting Guide to Optimal Health through Detoxification. As an up and coming astrologer, Khepra uses Sidereal Astrology to integrate health and nutrition with our star system in advising clients. Recently, Khepra was featured in the acclaimed hit documentary, The Healing Effect, released early 2014 by director Drew Scott Pearlman.